By, St. John of Kronstadt 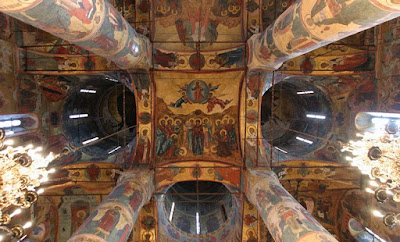 "In the temple, in its arrangements and parts, in the icons, in the Divine services, with the reading of the Holy Scripture, the singing, the rites, the entire Old Testament, New Testament, and Church history, the whole Divine ordering of the salvation of mankind is emblematically traced, as upon a chart, in figures and in general outlines. Grand is the spectacle of the Divine services of our Orthodox Church for those who understand it, who penetrate into its essence, its spirit, its signification, its sense!"


From: My Life in Christ, Holy Trinity Publications, p. 394.

Posted by Fr. Zechariah at 2:52 PM No comments:

Everything is in the Hands of God

An incident from the life of the Tsar-Martyr Nicholas II.

The Revolution of 1905-1906 was a warning to the Russians that, if they did not return to Christ as a nation, and if they continued to work and fight against their anointed ruler, they could lose God's blessing. As St. John of Kronstadt said in 1905: “Our Tsar is a man of righteous and pious life. God sent him a heavy cross of sufferings, as to His chosen one and beloved child, as is said by the seer of the mysteries of God's judgment: As many as I love, I rebuke and chasten (Rev. 3:19). If the Russian people do not have repentance, the end of the world will be near. God will take the pious Tsar from them and will send a scourge in the persons of impious, cruel, self-proclaimed rulers, who will inundated the whole land with blood and tears.” It is to the great credit of Tsar Nicholas that he was able to keep this from happening for more than ten years.

A great insight into Tsar Nicholas' character can be gained from the following incident, which occurred during one of the most violent moments of the aforementioned revolution. At the imperial residence at Peterhof, near the naval base of Kronstadt, which was under siege by insurrectionists, artillery shelling could be heard. Nicholas' foreign minister, Alexander Izvolsky, was giving a report to the Tsar at the time, and later recalled the following:

“He listened attentively, and, as was his habit, asked questions now and then, showing his interest in the smallest detail of my report. Glance as I would in his direction, I could not detect the slightest trace of emotion in his countenance, although he knew well that it was his crown that was at stake at that moment, only a few leagues away…. When my report was finished, the Emperor remained a few moments looking calmly out at the open window at the line of the horizon. For my part, I was oppressed by profound emotion, and could not refrain, even at the risk of infringing the rules of etiquette, from expressing my surprise at seeing him so unmoved. The Emperor did not apparently resent my observation, for he turned to me with a look which has so often been described as one of extraordinary gentleness, and replied in these few words, deeply engraved in my memory:

'If you see me calm, it is because I have the firm, the absolute conviction that the fate of Russia, my own fate, and that of my family is in the hands of God, Who has placed me where I am. Whatever happens, I will bow to His will, conscious of never having had a thought other than that of serving the country that He confided to me.'”

From: The Royal Passion-bearers of Russia, Their Life and Service. St. Herman Press, p. 13.