By St. Dionysius the Areogapite 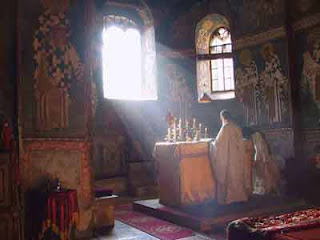 .... The sacred institution and source of perfection established our most pious hierarchy. He modeled it on the hierarchies of heaven, and clothed these immaterial hierarchies in numerous material figures and forms so that, in a way appropriate to our nature, we might be uplifted from these most venerable images to interpretations and assimilations which are simple and inexpressible. For it is quite impossible that we humans should, in any immaterial way, rise up to imitate and to contemplate the heavenly hierarchies without aid of those material means capable of guiding us as our nature requires. Hence, any thinking person realizes that the appearances of beauty are signs of an invisible loveliness. The beautiful odors which strike the senses are representation of conceptual diffusion. Material lights are images of the outpouring of an immaterial gift of light. The thoroughness of sacred discipleship indicates the immense contemplative capacity of the mind. Order and rank here below are a sign of the harmonious ordering toward the divine realm. The reception of the most divine Eucharist is a symbol of participation in Jesus. And so it goes for all the gifts transcendentally received by the beings of heaven, gifts which are granted to us in a symbolic mode.

The source of spiritual perfection provided us with perceptible images of these heavenly minds. He did so out of concern for us and because He wanted us to be made godlike. He made the heavenly hierarchies known to us. He made our own hierarchy a ministerial colleague of these divine hierarchies by assimilation, to the extent that is humanly feasible, to their godlike priesthood. He revealed all this to us in the sacred pictures of the scriptures so that He might lift us in spirit through the perceptible to the conceptual, from sacred shapes and symbols to the simple peaks of the hierarchies of heaven.

From: The Celestial Hierarchy

Posted by Fr. Zechariah at 6:20 PM No comments: