Why Orthodoxy? Body and Blood: Holy Communion as the foundation of true Christian Worship

True Christianity has always been maximalistic in Its belief. In recent times there has developed an idea that It should, and must be minimalistic. The nebulous line goes, “As long as you believe Jesus is Lord.” What kind of Lord or God becomes secondary to a degree. In fact one can get the impression that not even God Himself is sure what to teach those who believe in Him, one year He is speaking this, and then in a few years it changes (again!), to the point that He even seems to tell different groups radically different things!

Due to this relativism of belief, many foundational tenets of Christianity have been ignored or outright rejected by various groups. One such vital and unalterable cornerstone is Holy Communion. It has been the defining mark of True Christian worship since the very beginning. It is abundantly clear that Christians from the earliest times knew Holy Communion to be the Body and Blood of Christ. Not until the past few hundred years did the idea arise that it is not in truth Body and Blood, but only figuratively. 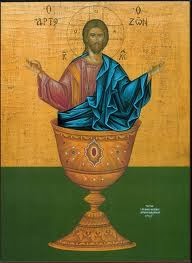 Christ Jesus Himself instituted Holy Communion. All three synoptic Gospels record a very similar command from the Lord, “Take, eat, this is My Body … Drink from it, all of you, for this is My blood of the new covenant, which is shed for many for the remission of sins … Do this in remembrance of Me” (Cf. Mat. 24:26-29, Mk. 14:22-25, Lk. 22:17-20). This is My Body and Blood. Most of the time in the Gospels when Christ speaks in a parable (figuratively) He goes on to explain to His disciples the underlying meaning of the figure. Here He does not, He makes a simple statement. But let us continue. In the Gospel according to John, we find a very detail teaching by Christ on His Body and Blood. Since the beginning this passage had been seen as Eucharistic, and not until the past few hundred years has it been couched it in a figurative light by those who refuse the very evident and literal intent of Christ's words. Christ says, “Truly, Truly, I say to you, Moses has not given you the bread out of heaven, but My Father gives you the bread, the true one, out of the heavens. For the bread of God is the One coming down from the heavens and giving life to the world … I am the bread of life; the one who comes to me in no wise shall hunger; and the one who believes in Me in no wise shall thirst at any time” (Jn 6:32-35). Christ Jesus clearly identifies His very Self as being life-giving bread. This is one of the many very purposeful I AM (Ego Eimi) statements in St. John.

In the following verse, Christ's Jewish listeners begin murmuring because He has identified Himself as the bread from heaven (cf. Jn 6:41). At this point the Lord begins to be even more explicit in His teaching, “Truly, Truly, I say to you, the one who believes in Me has everlasting life. I am (Ego Eimi) the bread of life. Your fathers ate the manna in the wilderness and died. This One is the bread of life, the One coming down out of the heavens, in order that anyone might eat of it and not die. I am the bread of life, the living one, the One having come down out of the heavens; if anyone should eat of this bread, he shall live forever” (Jn. 6:47-51a). Come … eat. The Greek word here is clearly, to eat (phago). But, once again, Christ Jesus does not stop at the concept of eating. He continues the teach them, “And indeed the bread that I will give is My flesh, which I will give for the life of the world” (Jn. 6:51b). His listeners if not already confounded are even more so, they wonder loudly and doubtfully how this could be (cf. Jn. 6:52).

At this point, the Lord makes His strongest statement yet, “Amen, Amen, I say to you, unless you should eat the flesh of the Son of Man and drink His blood, you are not having life in yourselves. The one who partakes of My flesh and drinks My blood has eternal life; and I will raise him up on the last day. For My flesh is true food and My blood is true drink. The one who eats My flesh and drinks My blood abides in Me, and I in him … the one who eats Me, even he shall live because of Me” (Jn 6: 53-57, bold highlights mine). Christ progressively reveals the unfathomable truth He is speaking about, come and eat, eat My flesh, drink My blood. In the Greek, the complete force of Christ's words is clearly evident. Unfortunately, some translations have softened this force. True (bold in the quoted text) is aleethis, which means as true as true can be, reality, most certainly, existent truth, in other words right now Christ is emphasizing - I am not speaking in figures. The word 'partakes' is the Greek word trogo which means quite clearly to gnaw, crunch, or masticate. This use of partake/eat is clearly not figurative. An honest look at the context of these verses reveals that Christ Jesus was very clear about the need to receive His Body and Blood. The end result of this teaching is that many of His disciples leave saying, “Hard is this saying; who is able to hear it” (Jn 6:60)? The Lord does not at this point tell them, “Wait I am speaking in figures! You do not really have to eat my Body or literally drink my Blood. This is just an image of spiritual communion with Me!” No. In fact, He is so serious about this teaching that He asks the twelve if they would like to leave also. The Lord also reveals that reception and belief in the mystery of Holy Communion come by the Holy Spirit, “It is the spirit that makes alive; the flesh profits nothing, the words I have spoken to you are spirit and life” (Jn 6:63). 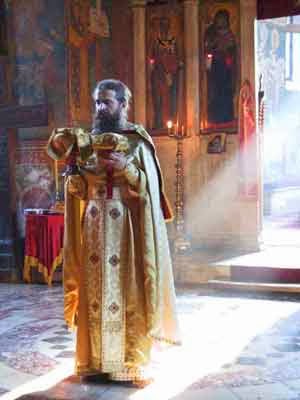 The very earliest Christian witnesses, outside of Scripture, confirm an unshakable belief in Holy Communion as the Body and Blood of Christ. St. Ignatius of Antioch (a disciple of the Apostle John) says regarding Communion, “Breaking one bread, which is the medicine of immortality, the antidote we take in order not to die but live forever in Jesus Christ.” And again he says, “Take care, therefore, to participate in one Eucharist (for there is one flesh of our Lord Jesus Christ, and one cup, which leads to unity through His blood ….” Another witness of early Christian worship, St. Justin Martyr, relates, “we do not receive these things as common bread or common drink; but as Jesus Christ our Savior being incarnate by God's word took flesh and blood for our salvation, so also we have been taught that the food consecrated by the word of prayer which comes from him, from which our flesh and blood are nourished by transformation, is the flesh and blood of that incarnate Jesus.” The list of testimony could go on, down until our own day, but there is not enough space here for that.

One would do right to wonder why such a paramount belief has been reduced, minimized, and even abandoned by so many groups who claim Jesus Christ as Lord?

Orthodox Christianity has held true to the vital Christian belief of Christ's true Body and Blood throughout the years, it is indeed the foundation and apogee of true Christian worship.

Posted by Fr. Zechariah at 3:10 PM No comments: