One may easily hear the prophetic voice of Archbishop Averky, most of all considering that these talks were given shortly after World War II. With the eyes of the spirit, he clearly foresaw the end of the path upon which humanistic freedom was leading mankind. A very timely, sober, and challenging message. One we and our world must heed. 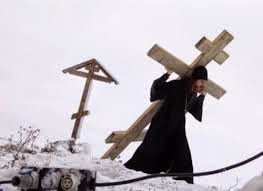 True freedom, which grants happiness, is freedom from sin. Is this how contemporary people understand freedom, and is this the freedom they seek?

Unfortunately, no. Modern man's conception of freedom is completely different. Therefore, chasing after illusory freedom, he has fallen into the most cruel slavery that can be imagined … self asserting pride is the guiding force in the life of modern man. This pride has rejected God and declared that man is god unto himself. There is no sin; anything is lawful and allowable for man. Any restriction, any constraint upon his sinful will seems to him a violation of his freedom. He understands freedom as the right and the opportunity to do anything he desires. No one may restrain the man-god in his freedom. “I want, I have the right,” becomes the slogan of modern man. “In struggle you take your rights,” “life is a battle,” “struggle for existence” - these slogans become the guiding principles of modern life. And truly life has become a battle: a fierce battle for existence, or rather for lordship, for predominance, for exclusive possession of all earthly goods. It's only natural. One says, “I want, I have the right.” Another says, “”I want, I have the right,” and yet a third says the same, adding, “I'm no worse than they,” and on and on. This results in a dreadful conflict of human wills and claims regarding the right to do something or other, or to possess the good things in life. From this comes envy, jealousy, rivalry, hatred, enmity, robbery, murder, discord, wars – in a word, all that makes man's life hell. Where does this come from?

All of it stems from an incorrect understanding of freedom. Instead of freedom from sin, people began to strive for the freedom to sin. True freedom, freedom of spirit, Christian freedom came to be considered “despotism,” “coercion,” the oppression of the Church, while the dissipation of one's sinfull will, which leads to enslavement of the spirit, was made life's ideal. True freedom was exchanged to an illusory freedom that in fact leads to true despotism, the the agonizing tyranny of sin. For nothing on earth tortures or tyrannizes man as does sin, as a sinful passion that he has carelessly allowed to enslave him … To such a person, Christian freedom seems to be slavery, despotism. “The fleshly man,” says St. John of Kronstadt, “considers attending church, prayer fasting, abstinence, and all the instructions and demands of the Church to be slavery, and he does not know that these are requirements of his own soul.” Thus is distorted and misunderstood the true essence of things by all those who are controlled by passions.

Beginning with the era of humanism, man began to move away from God in his way of thinking. He then began to lose the conception of true freedom, Christian freedom, freedom of spirit. So began his pursuits of illusory freedom – Freedom from anything restraining man's animal instincts – that is, to put it bluntly, a cynical yearning for licentiousness and dissipation in everything. It is in the name of this freedom, which brings a complete degradation or morals and innumerable disasters for mankind, that all the revolutions were fought, when rivers of blood were shed and human brutality reached its apex.

The most terrible thing is that, as we have said, the evil of our times has cleverly disguised itself as good, and therefore, the slogans of these revolutions seemed very seductive. In recent times, particularly enticing and fashionable have been such slogans as “freedom of conscience,” freedom of the press,” “freedom of speech,” “freedom of assembly,” etc. To many it seemed that these freedoms are the embodiment of supreme justice.

We have now seen what the realization of these “freedoms” has brought in actuality. In place of the expected freedom and earthly paradise, cruel slavery, not only spiritual but even physical, has followed. These “freedoms” turned out to be necessary only for those who needed free rein to sow evil among people unhindered, and to set them against each other. Instead of freedom from evil there is freedom for evil. Do people need such freedom? Is there happiness in such “freedom”? Of course not!

The decisive factor in (modern man's) life is the very self-asserting pride that cannot and does not want to submit to any restraints or limits imposed upon the sinful human will, no matter how reasonable. Instead of true freedom, moral dissipation has become the characteristic sign of our time. And this moral dissipation has led to the fact that shameless, dishonest, and insolent people, as the Word of God calls them (cf. 2 Tim. 3:4), have begun to prevail over those who are modest and conscientious. Under the pretense of “freedom,” the wicked and the strong have enslaved the good and the weak. Thus, the hypocritical advocacy of freedom, the call to defend the rights of man, in fact result in the destruction of any and all freedom, in the loss of the most basic human rights. And where this imaginary freedom has not yet brought about such external enslavement and spiritual oppression, there reigns complete moral dissipation, and the people are suffocating in an atmosphere of hypocrisy, lies, and every crudity.

For us Christians, especially those who have now witnessed such unequivocally terrible fruits of these imaginary freedoms, it should be clear that the salvation, happiness and well-being of humanity lies not in dissipation nor in unrestrained passions, but in the search for true freedom – Christian freedom, which is in the deliverance of man's soul form the sin which torments it.