True Christianity and The Fundamental Task of the "New" World

By Archbishop Averky of blessed memory, +1976 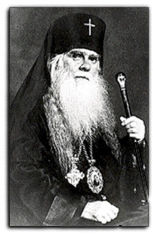 The fundamental task of the servants of the coming Antichrist is to destroy the old world with all its former concepts and "prejudices" in order to built in its place a new world suitable for receiving its approaching "new owner" who will take the place of Christ for people and give them on earth that which Christ did not give them ....
One must be completely blind spiritually, completely alien to true Christianity not to understand all this!
+
Zeal for God, zeal for the Truth is not "phariseeism," just as "humility" before the enemies of God, the enemies of the Church, before diabolical Evil, is not the true and saving humility of the Publican, but just destructive self-deception, leading to the depths of hell.
In our times, when there are such strong doubts about even the existence of Truth, when every "truth" is considered relative and it is considered proper for each person to hold to "his own truth," the struggle for the Truth acquires a particularly important meaning. And the person who does not sympathize with this struggle, who sees in it only a manifestation of "phariseeism" and suggests "humbling oneself" before Falsehood by falling away from the Truth, should naturally be recognized as a betrayer of the Truth, whoever he might be, whatever he might call or consider himself.
+

Thus we evidently have lived to see this "terrible and quick collapse of the structure of the Church!" The enemy of the human race is employing all his efforts and all his means to pull it down, and he is widely supported in this by open and secret apostates from the true faith and Church, including even those who have betrayed their high vocations and oaths as clergymen and even as hierarchs heading certain individual churches.
In truth, we are experiencing a terrible time, a time such as has never before been seen in the history of Christianity, in the history of mankind! A time of almost total instability!
And insofar as we wish to remain faithful to true Orthodoxy, many obligations are placed upon us. We must, as Bishop Ignatius instructs us, avoid and protect ourselves from the Apostasy which is growing so rapidly in the world. We must defend ourselves against the corrupting spirit of the times to avoid its influence.
And to this end we must first of all understand and never forget: that at the present time not everything that bears the most holy and most dear name of Orthodoxy really is Orthodoxy. There now also exists pseudo-Orthodoxy, which we must fear and from which we must flee as from fire; that true Orthodoxy is only that which does not accept and does not permit in anything, either in teaching or in church practices, any sort of innovations opposed to the Word of God and the decrees of the Universal Church; that true Orthodoxy does not bless and does not indulge modern fashion- the morality and customs of the modern, corrupt world, which, even more than in Apostolic times, is lying in evil, for it is a world which has abandoned God; that true Orthodoxy considers only pleasing God and saving souls, not arrangements for temporary, earthly happiness, a career, and earthly advantages and possessions; that true Orthodoxy is spiritual, not natural and carnal, not attached to the earth-to earthly feelings and experiences.
+

As salt preserves food from decay and makes it healthful and pleasant to the taste, so too true Christians preserve the world from moral decay and facilitate its return to health. But if the salt "loses its savor," as the Gospel says, i.e. "loses its strength" (in the East there actually is a kind of salt which can lose its taste), then it becomes good for nothing except to be "thrown out to be trodden under foot of men" (cf. the Gospel reading for the third day of the feast of Pentecost, Matt. 5:313).
How terrible this is! And we find ourselves living in such times when the tendency dominating the world is directed toward making all Christians such "salt which has lost its savor," once it has abolished the true Church of Christ derived from the Holy Apostles and thus has deprived Christians of the grace of the Holy Spirit.
This is the so very fashionable, so-called "ecumenical movement," which is based in the position that supposedly the true Church of Christ does not presently exist on earth and it is necessary to create it anew...through the unification of all Christians belonging to various "churches" and confessional associations and organizations; this will be done by various mutual concessions in matters of doctrine and the development of a new, common system of doctrine acceptable to all and, along with it, of course, a new world view.

And the opinion, extremely popular in our times, that "it's all the same which church you go to; after all, God is one" is in agreement with this tendency. Yes! God is one, but, you know, He also gave us one faith; He created one Church for us, not many different faiths and "churches." This is confirmed by the holy Apostle Paul when he says, "One Lord, one faith, one baptism, one God and Father of all," and so we Christians should form "one body and one spirit," as we are called to "in one hope of our calling" (Eph. 4:4-6).

If there is only one true faith and only one true Church, then as a consequence all other faiths and "churches" are false, not true. How then can anyone say that all faiths and "churches" are of equal value and that "it is all the same which church you go to." Therefore one can and must speak not of the ecumenical unification of everyone for the creation of some new Church, but only of the restoration of union between all who have fallen away and the one true Church of Christ to which Christ the Savior Himself gave the great and sure promise that "the gates of hell will not prevail against it" (Matt. 16:18).
+


While struggling resolutely against the most minute manifestations of evil and sin in our own souls, let us not fear to uncover and point out evil everywhere where it is to be found in modern life-not from pride and self-love, but only out of love for the truth. Our chief task in this evil time of lying shamelessness is to remain totally faithful and devoted to the genuine truth of the Gospel and to the author of our salvation, Christ, the Giver of life Who rose on the third day from the tomb, the Conqueror of hell and death.

Posted by Fr. Zechariah at 2:34 PM No comments:

Having been deeply moved by the life of the New-Martyr Elizabeth, I began searching for service material so that we may serve her feast day, but was unable to find it in English. Yet, with the help of a friend I was able to find it in Slavonic. The translation below is by my wife and me. Although there may be another translation out there somewhere, I hope this will enable others seeking service material in English to offer praise to God in His saints. New-Martyr Elizabeth pray to God for us!


Vespers Service to the Venerable-Martyr Elizabeth and Her Companions
July 5th/18th
Composed by a Hieromonk of Mt. Athos
Julian (Old) Calender rubric- if the Superior allows the service may be done in conjunction with that of the Venerable Sergius of Radonezh

O Venerable-Martyr Elizabeth, * Taking up the cross upon thy shoulders,* thou wast obedient even unto death * for the sake of thy Beloved, crying out * no one can separate me * from His love!

O Venerable-Martyr Barbara, * thou wast faithful to thy superior in this temporal life, * remaining steadfast until the end * according the word of Christ, the Leader and Judge of the contest, * the one who is faithful in little, * shall be faithful in much.

Grown from a blessed root, * subdeacon John, Constantine, and Igor, princes and patient passion-bearers, * and good sufferers for Christ. * O Lord, when the time of our testing comes upon us * may we bring forth spiritual fruit, * and also be crowned.

Today we celebrate the venerable Serge, * and the translations of relics, * O Grand Duke and passion-bearer Serge, * thou hast crossed over to eternity, * together with the faithful Feodor. * All these saints we magnify!

Glory … Tone 6
Lambs of the True Shepherd, and revealed passion-bearers, * O Venerable-Martyrs Elizabeth, and Barbara, * great princes John, Constantine, Igor and Serge, * patient sufferer Feodore together with Vladimir, * amidst the wild wolves you were unharmed, * you came to a good end and preserved your faith in Christ the Great Shepherd; * now you abide in the divine heavenly mansions.
Now and ever …
Theotokion or Stavrotheotokion in the same tone

Apostika
Verses from the Octoechos

Glory … Tone 8
O praised Martyrs of Christ, * subduing1 all mortal inclinations, * you looked upon temporal death as nothing, * and arming yourselves with bravery * you went in courageous wisdom to battle, * and now are clothed in victorious glory, * counted together with the righteous, * along with all of them, * we praise and magnify you!

Now and ever …
Theotokion or Stavrotheotokion in the same tone

Meekness, humility and love dwelt in thy soul, * Diligently didst thou minister unto the suffering; * O Holy Passion-Bearer Princess Elizabeth, * With faith didst thou also endure suffering and death * For Christ with the Martyr Barbara. * Together with her pray for all them that honor you with love.2

From the glories of an earthly kingdom, * through taking up the Cross, thou didst pass over into heavenly glory; * by praying for thine enemies, thou hast obtained eternal joy, * O Holy Martyr Grand Duchess Elizabeth, * and the Martyr Barbara, * pray for the salvation of our souls.

Unless otherwise noted translated by Fr. Zechariah and Mat. Natalia

The original Slavonic may be found here

2 Not our translation, from the book Grand Duchess Elizabeth of Russia.

Posted by Fr. Zechariah at 4:06 PM No comments: